Have you moved recently? Are you planning to move soon? Are you comfortable where you are and are just reading this post to kill time while your coffee is brewing? Don’t worry peeps. I’ve got you covered.

Now that I’m about 3/4 settled in Calgary, I have some very practical learned-from-real-life-experience relocation tips for you.

Does your new city have a Zombie Survival Race? If so, sign up and run for your life. If not, you’ve clearly moved to the wrong city. Pack everything up right now and try again.

Here’s why it’s a good idea. When you’re making new friends, you’ll want to know right off the bat who’s going to leave you in the dust, who’s going to stick with you, and who you’re going to want on your team during the apocalypse. You can take months to figure that out on your own, or you can do it over 5 kilometres in one zombie infested afternoon.

You’re also going to totally impress the cute guy in the elevator when you get home covered in mud. When he looks startled by your appearance, just shrug nonchalantly and casually explain, “I was running from zombies.” Because that’s not strange or geeky at all.

Hopefully zombies are allergic to mud. If so, I’m totally safe.

Nobody wants to lug bulky stuff like a toaster, a dish rack, a laundry hamper and a blow dryer home on the bus all at once. And nobody wants to make 4 separate trips to the store and buy them one at a time.

And by nobody, I mean me. I don’t want to do those things.

So, I joined Amazon Prime and got most of those things delivered to my door. Except for my printer, which I accidentally had shipped to my parent’s old house. When I discovered my error, parts of the following conversation may or may not have happened…

“Hi parents. I bought a printer, but it was delivered to your old address. Do you think you could knock on a stranger’s door and convince her to hand over the goods? … Yes, I know it’s embarrassing, but you probably shouldn’t wear a mask when you go, she might get the wrong idea … No, I’m not going to ‘accidentally’ have the next order delivered to the handsome guy on the 12th floor … Because my next order is 48 rolls of toilet paper. That’s why … No, it didn’t snow today … Yes, I love you too.”

As an added bonus, each order comes wrapped in a free feline amusement device. My cat now has more furniture than I do. On the upside, I hear cardboard boxes are making a fashionable comeback. Or so Catticus tells me.

Not just about how to survive a zombie apocalypse. You’re also going to need to put some effort into real plans too. Why? Because you’re going to wake up every day and think that you need to do all the things at once. Your to-do list will be 100 pages long, and you won’t know where the right stores are or how to get to them, and instead of making a plan, you’ll become paralyzed with indecision and watch Netflix.

Or maybe that’s just me.

Unless you own a 16-wheeler, and your days are magically 68 hours longer than mine, you’re not going to get everything you need all at once. (Even IKEA can’t make that happen. I know, I’ve tried.) So, as some hip-hoppity rap lyrics suggest: Break It Down (down down. Ooh Ah. Break it Down. Yeah.)

Don’t go out and stock your pantry in one giant swoop. Plan your meals for the week, then just buy the ingredients and spices you’ll need for those recipes. Eventually, you’ll have all the cumin and olives and bay leaves that all respectable kitchens should have. Also, don’t forget to buy the hardware you’ll need to make the recipes. Otherwise this will happen:

Me vs. Corn – with no can opener to intervene, we’ll just fight it out until one of us needs a bandaid.

Start making your new city feel like home. Because it’s where you’re going to be living for a long time…at least until the zombies come.

Do you have any great re-location tips? Share them in the comments!

Don’t worry folks; I’m not going to go all Blog Noir just because I have a snazzy new address. I won’t even mention the love lives of my kitchen lizards again. I think this post is actually going to be about fruit…but I’m only 1 paragraph in, so who knows where we’ll end up.

Passion fruit is in season here now, which is great because I can walk around my house all day saying “PASSION!” as often as I like without sounding like a weirdo. (Well, maybe I still sound like a weirdo – but at least for the next few weeks, I’ll be a weirdo with a reason.) 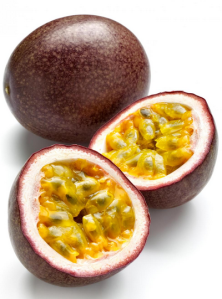 I do love that word: Passion.

The linguist in me likes the explosive popping of the ‘p’ paired with the shushing of the ‘ss’. To me, it comes out tasting like smooth dark chocolate flecked with chili peppers, and should be spelled with extra ss’s.

Go ahead; say it out loud a few times. I’ll wait. (Just be careful if you’re reading this at work or Starbucks, or on your iPhone in a public washroom. Things could get kinda awkward really quickly.)

See? It’s not like one of those awful words like slacks or yeast that you try to avoid saying. Phonetically, it’s pretty great. On its own, it’s a good word – but I get antsy when it’s wrapped up in that impossible question:

“WHAT’S YOUR PASSION IN LIFE?”

Yup, I kinda want to wear this every day.

Also kinda want to wear this every day!

All things awesome, in one handy notebook.

Don’t get me wrong. Those things are ALL AWESOME. But at the next step in the passion identification conversation, things get tricky. Apparently, once you’ve identified your passion, you’re expected to follow it.

How do you follow a zombie-pirate kitten wearing a hoop-skirt and a snorkel??

Around this point in the conversation, I usually realize I made a wrong turn somewhere.

There are some people who can answer the question easily, and without hesitation. Those people make me think of bananas. They have one, consistent, reliable passion that fits perfectly in their skin and fills their life – and they’re confident enough to wear bright yellow. I’m not a banana.

I’m more like a passion fruit. Kinda lumpy and plain on the outside, (I’m not body-snarking, it’s just an analogy) and a mess of sweet, sour, tangy, mushy softness on the inside that doesn’t quite fit snugly in its own skin. But the messy innards hold dozens of solid seeds that represent things like faith and justice and education and hope and literacy and all the other things that I really am passionate about.

But explaining all that to someone who asks, “What’s your passion?” is kind of exhausting. And comparing yourself to a passion fruit can make you seem like a weirdo. Maybe it’s best to stick with normal answers like hoop-skirts and zombies.

How about you? Are you a banana or a passion fruit?