My house is a strange place to be on a Friday night.

I’ve never seen the appeal in going out and whooping it up, just because it’s Friday, (The fact that I just used the phrase “whooping it up” probably already tells you so much more than you need to know), but once in a while, I feel like I should at least acknowledge the fact that it’s Friday night.

Sorry…let me pause here. I also feel like I should acknowledge the fact that I haven’t posted in over a month. So let’s just get that cleared up right now. I was on holiday…and now I’m back from my holiday with lots of things to say…but I’ve discovered that blog posts take so much longer to write when I actually think about what I’m writing.

As I continue to process my holiday, and work on a few ‘thinky’ posts, I’ll use this Friday night to get back into the swing of things. I thought it might be nice to start with a little quiz. A grocery quiz. You see, when I was doing my undergrad, I loved doing my grocery shopping late, late, late at night for two reasons:

#1. I loved gliding down the empty aisles using my shopping cart as a giant cumbersome scooter, with my midriff balanced on the handlebar. It’s best to do this in the cereal aisle, not the jam-jar or garden rake aisles. Because, you know, safety first and all that.

#2. People shopping at midnight buy some weird stuff. I liked trying to come up with stories that would explain why the middle-age woman in front of me was buying baby powder, jumper cables, and a can of peanuts…or why the 20-something man behind me was buying 3 bags of dried lentils and a box of toaster strudel.

Tonight’s adventure included a late-ish trip to the grocery store (sadly, none of them are open 24-hours here) and these items: 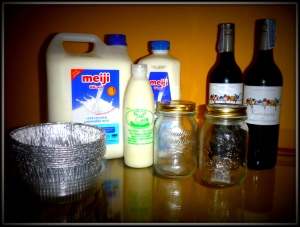 In case the picture isn’t clear, that’s 7 litres of milk, 1/2 a litre of buttermilk, 2 bottles of wine, 2 mason jars and a stack of disposable metal bowls.

What’s happening at my cottage tonight? Leave your guesses in the comments below!

The other day was a bit hectic, and included fighting with Jason Bateman (in my dream), flooding my kitchen (in real life), baking an entire batch of cookies for the ants (in error), and gardening with the help of my ancient neighbour and his cane (wielded like a sword).

You may be asking yourself, “Why didn’t I read about this? Why wasn’t such a day recorded for posterity on this blog that I sometimes read when I have absolutely nothing else to do with my time?” Dear reader, I have no excuse. It just didn’t seem news worthy.

However, since it’s been so long since I’ve written, and you’ve been so patient, I’ll tell you all about today’s adventures. I’m pretty sure it’s going to sound like I had a terrible, awful, dreadful day. I really didn’t. Overall, I’m feeling pretty good…but today, the rains came…and when the rains come, they bring trouble.

I came home this afternoon to find water dripping out of a leak in my ceiling, an overturned lamp, a shattered light bulb and a completely complacent cat curled up on the sofa, blissfully unaware of the shambles around her. For a feline, she is remarkably un-curious. Not only will curiosity never kill this cat, it won’t even give her so much as a hangnail.

Eventually, buckets were put in place, landladies were alerted, broken glass was swept away…then the bugs came. Every year, the first heavy rain of the season awakens the flying termites, who noisily swarm the nearest lights. Last year, I still had my mosquito net up, so took refuge under it and waited for the maelstrom to pass.

This year, I wasn’t so lucky. Not only was I exposed to the onslaught of fluttery bugs, the floor fan in my room was sucking them in, mashing them up, and blowing an oscillating stream of wings and bug-bodies all over my room. I had high hopes that the cat would at least take care of some of them…but no. Even after one bug flew directly into her face…twice…she looked at me like it was my fault, then sauntered away, completely ignoring the fluttery mayhem around her.

I needn’t have worried about the mess the bugs made. Even as they were falling to the ground, the ants were marching to collect their fallen bodies and cart them off to who-knows-where. (Honestly, I don’t know where…if I did, I’d do something about it.) Now, the only evidence of the bugs is a few scattered wings on the floor, and all is quiet. But the rain has started again…

Alright, my long-suffering readers. It’s time for you to have your say! Here’s how this works:

I’ll list, in order, my experience from the other night. You choose which line you think is most shudder/scream/Eeek! worthy. Okay? What’s worse…

1) A giant cockroach landing on the wall nearby.

3) An angry, sprayed cockroach flying around dive-bombing your head for 10 minutes.

4) A dying cockroach twitching under your desk for a few minutes.

5) The definitely dead cockroach completely disappearing while you slept. (Because it’s impossible to cope with dead bugs when it’s dark outside, waiting ’til morning is best. But how does a giant dead cockroach vanish in less than 4 hours!!??)

(The good news is that this is the first cockroach I’ve seen in a very long time!)