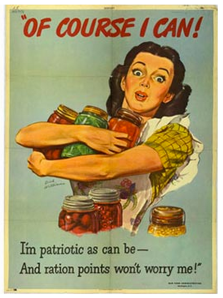 “It is your responsibility, no matter how difficult the task, to see that your husband and children are well fed and happy when they come to the dinner table.” – Wartime Canada How To Eat Well Though Rationed (1943)

Since I have no husband or children to keep well-fed and happy, I assume that Wartime Canada wouldn’t object to my personal diet of Halloween candy, coffee and cheese. They obviously don’t care if I’m happy when I get to the dinner table, so they won’t mind if I just snarf down a Snickers bar while lounging on the sofa.

Despite the Canadian government’s mid-century lack of concern for adult women, I’ve taken it upon myself to see what a WWII ration diet would be like in Canada, based on this shopping list: 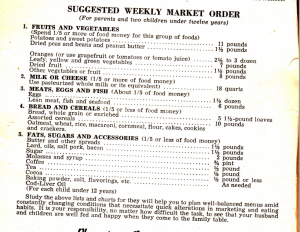 Why am I shopping from a 60 year old shopping list?

Because I have too much time on my hands.

And, after a decade away from Canadian grocery stores, toaster strudels and Oreos are calling to me from the aisles like sugary sirens of doom. That’s why.

Now, where was I? Ah, yes. I had originally thought that I’d follow a British ration diet, like this pretty amazing lady in the UK. However, the thought of consuming a whole box of powdered eggs grossed me out. (This, coming from the girl who likes fried crickets.)

Then, my Grandma mentioned that during the war years, they used to send eggs from their farm in Saskatchewan to their relatives in the UK, nestled in bags of oatmeal.

(I’m not sure if that was legal, so I really hope I’m not divulging any criminal family secrets here…)

Eggs weren’t as scarce here, especially if you lived on a farm. Brits could have 1 fresh egg per week. Canadians got 5.

Taking a closer look, I discovered that rationed Canadians had access to at least twice as much, sometimes three times as much of any given item. Except for tea. British rations allowed for twice as much tea. Someone in the British Home Office knew the priorities of their citizens. So if you ever hear a Canadian and a Brit reminiscing about the hardships of rationing during the war, I’d save most of my sympathies for the one who had to eat powdered eggs, and only got 1/4 of a pound of bacon every week.

I took the shopping list above, divided everything by 3 or 4 (whatever was easiest to divide), since the original list is for a family of four. I thought it looked like a decent amount of food.

It’s a serious heap-ton of food. This is supposed to feed 1 adult for 1 week, but it’s easily 4 times as much as I usually buy. (And yet, surprisingly, it’s wasn’t much more expensive.) Which made me wonder – if this was the rationed amount, how much were Canadians eating before the war? 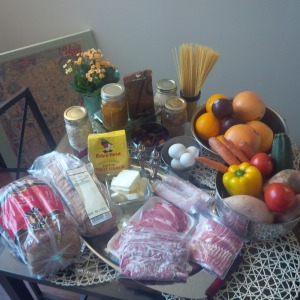 I can’t eat all this in a week.

I forgot to include the giant 4 litre jug of milk and 2 oz of cocoa in the photo. (There’s a pile of spinach leaves hiding under the jar of brown sugar, just in case you were thinking there wasn’t much greenery in the mix).

I also kept the flowers on table, to show my Mom that I haven’t killed them yet.

And you’ll notice there are no Oreos. Which is too bad, since I now have a giant jug of milk to dip them in.