Apparently, I kind of live in a real-life version of the Isla de Muerta. As Captain Jack explains, “It’s an island that cannot be found except by those who already know where it is.” I’ve realized that my little cottage is actually the land-locked version…so maybe I live in the Casa de Muerta. 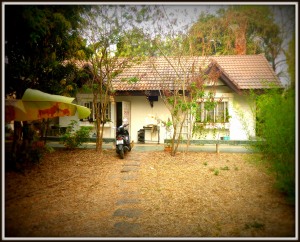 The cutest little Casa de Muerta that you never will see.

Since I’m a bit of an introvert, I love the idea of dwelling in a secret hideaway. This isn’t even the first time I’ve lived in a well-hidden home. The last time I lived in Canada, I had a cozy little apartment above a book store (Yes, that is legendary. There’s no denying it.) It even had a secret hole in the floor behind my fridge that opened up into the storeroom below. That was a bit creepy, but also delightful in it’s own way.

The thing is, it didn’t look like a place you would find an apartment. At night, it looked like an industrial delivery door at the back of a closed store in an empty parking lot in a shady part of town. Taxi drivers refused to drop me off, because they wouldn’t believe anyone lived there. Even more distressing, no matter how many times I tried, pizzas never found their way to my place.  (Tales are told of the ghost of my pizza delivery driver, who still cruises the streets of Moncton looking for my home, a 14 year old pepperoni pizza moldering in the box beside him…or so I like to think.)

With that apartment, I get it. It was a weird place to live.

But my cottage here? It should be a breeze to find. It’s right smack in the middle of a yard, visible from the street, and cute as a button. People should be flocking to my gate just to stare at my little French doors and say, “Awww, isn’t that the cutest little house you ever did see? I bet a fairytale princess-to-be lives there.” And then they’d see me wander out in my grubbies to hang up my laundry on a Saturday morning, and their dreams would be shattered…but still. They should be there.

But no one ever pauses at my gate (except the neighbour’s dog, who thinks the gate is a movie screen, and my cat is Elizabeth Taylor, and he doesn’t count anyway because he’s a dog). In fact, in all the years I’ve lived here, no matter how many maps, pictures, directions, visual land marks, and Google Earth screenshots I provide, people cannot find my house.

Like I said, I like my privacy, so it’s usually not a problem. Ordering pizza is still impossible, but I’ve already learned to accept that particular hand of fate. The problem is, now that I’m leaving, I have some stuff to sell…and strangers wanting to come buy my stuff…strangers who have never been here before and can’t find my house because apparently I really do live in some kind of secret invisible magical place.

As I’ve been packing, I’ve been dreaming some big dreams for my future apartment in Canada. I’ve got some pretty luxurious items on my wishlist, things that are rarities in Asia: a bathtub, hot tap water, and an oven. Like I said, I’m dreaming big.

Now, with all the hullabaloo involved in living in an invisible house, I’ve decided to add one more tiny little thing to my wish list. My building needs to have a Batman beacon on the roof. Preferably one with interchangeable symbols, so I can summon either Batman or pizza. Actually, just the pizza one will be fine. After all, I don’t want my future landlord to think I’m unreasonable.

What’s the strangest house or apartment you’ve ever lived in?

3 thoughts on “Adventures on the Isla de Muerta”