Okay, so maybe I overreacted in my last post. I wrote it a moment after I realized that I could get on a plane and fly back to Asia in the time it would take me to get to the next province. So maybe I panicked a little.

But I was wrong.

Once we really got rolling, my attitude began to change:

1. It Could Be Worse

I mean, it’s not like my bus trip in Cambodia. You know, the one where I had violent, smelly, explosive food poisoning shooting out both ends of my digestive system every thirty minutes. For 8 hours.

The only complaint my stomach had on this trip is that my chocolate bar wasn’t going to last the whole way. I might have to get another one when we stopped in Medicine Hat or Swift Current.

2. It Was (Relatively) Quiet & Squid Free

The bus wasn’t airing scary violent movies at top volume, or playing equally loud karaoke so middle-aged women could have a dance party in the aisles. And nobody around me was eating dried squid. Because all that really happens in a country that shall remain nameless. And it was awful.

The woman next to me was going all the way to Ottawa. I was finished my journey by Friday night…she would be finished sometime on Sunday. The woman behind me had already been on the bus for 2 days…with an infant…and had another 3 days to go. Suddenly, 10 hours didn’t seem like such a long time.

4. It Was a Soap-Opera on Wheels

While the trip was Karaoke-free, the relative quiet did nothing to mask the conversations going on around me. Seriously, I could fill three novels with the stories I overheard on that drive. Did you know that some people in Canada still hop trains and ride the rails like 1930’s hobos? Did you know that bears in lumber camps love the smell of discarded dishwater and will rip through the shower stalls to get to the shared drain? Did you know that if your boyfriend breaks up with you over the phone while you’re on your way to meet up with him, 3 different strangers will hand you a Kleenex…and everyone will feel relieved 50 miles later when he calls back to un-break-up with you?

5. We Drove Across the Prairies

I love driving across the prairies. I know a lot of people think it’s incredibly boring, but it’s hands down my favourite place in Canada for road trips. It’s not just that the sky is incredibly blue, or the clouds impressively fluffy. 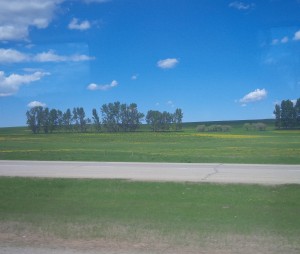 It’s that the road is long, and smooth, and straight. You can see everything that’s coming at you – all the way to the horizon. No surprises. No hidden turns. You know, kind of the opposite of the rest of my life. I find the predictability soothing.

(Okay, it’s also kind of because I can stare out the window for hours and pretend I’m Laura Ingalls in a covered wagon, making her way with Pa and Ma to her new Little House on the Prairie…if Laura Ingalls had traveled with train-hopping lumber workers in unstable relationships…)

6 thoughts on “Adventures on the Bus … the saga continues”